James Brooks, one of the original Abstract Expressionist painters, was known as a lyrical painter and was one of the most technically accomplished — if not the most innovative — members of the New York School. His skilled, rhythmic compositions of abstract shapes, textures and color values, carefully orchestrated in shallow space on the canvas, brought acclaim from critics as well as several major prizes. One was awarded by the Carnegie International exhibition in 1956 and another by the Art Institute of Chicago in 1957. A decade later, he was given a full-scale retrospective at the Whitney Museum of American Art in New York City, and his work is in the collections of major museums in the United States.
James David Brooks was born in St. Louis on Oct. 18, 1906, and studied art at Southern Methodist University and the Dallas Art Institute. In 1927, he came to New York, where he attended night classes at the Art Students League and worked as a commercial artist by day. In 1936, he joined the Federal Art Project as a muralist, remaining with the project until 1942. From 1942 to 1945, he served with the United States Army as an art correspondent.

On his return to New York, his work turned toward abstraction. In his first one-man show at the Peridot Gallery in 1950, he presented stained and “dripped” canvases, influenced by his close friend Jackson Pollock, in which stains made on the reverse side of the canvas were used to generate “spontaneous” painted shapes on the front.

In 1951, he participated in the historic “Ninth Street Exhibition,” an artist-organized show that included the work of Pollock, Hans Hofmann, Franz Kline, Willem de Kooning and Robert Motherwell. In 1956, his work was part of the “Twelve Americans” show at the Museum of Modern Art, as well as the Modern’s influential “New American Painting” show in 1959, which traveled through Europe. 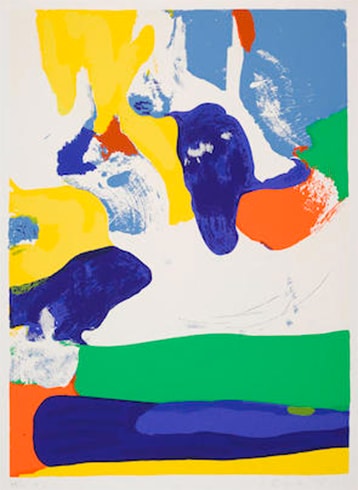 Galleries who deal in prints from James Brooks