Born in Italy, Leonetto Cappiello began his career as a self taught artist of drawings. Cappiello followed his brother to Paris in the late 19th century and was so drawn to the dynamic artistic scene of the time that he decided to settle there.

During those early days in Paris, Cappiello was known as a caricaturist drawing for French journals and magazines. Several books of his works were published in the early 20th century featuring dozens of his now famous lithographic prints and a handful of colour images.

Cappiello’s interest moved to creating posters where he quickly gained a reputation in the world of advertising. In fact, Cappiello has often been referred to as the ‘father of modern advertising.’ The early 20th century in Paris was a time of experimentation in the art world and the colour and vibrancy that Cappiello brought to his work on advertisements was widely celebrated. Cappiello’s unique and innovative poster designs featured bold figures on black backgrounds – the opposite of what was the norm during this time.

One of the key points of distinction in Cappiello’s pieces is that his style was so unique that his work was recognised irrespective of the brands he was advertising.

During the span of his career Cappiello created in excess of 530 original advertising posters which included the now famous images of Campari, Chocolat Klaus, Pirelli and Poudre de Luzy. 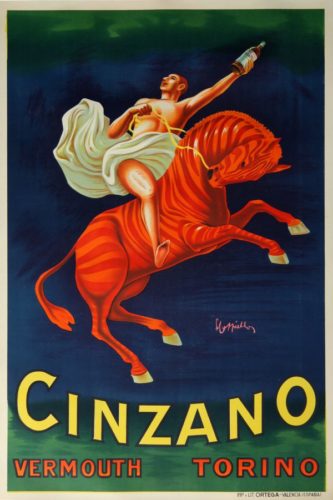 Galleries who deal in prints from Leonetto Cappiello