Maurice Utrillo (1883-1955) was the son of artist Suzanne Valadon who, at the time of his birth, was an 18 year old artist’s model. Maurice’s father was never confirmed, despite speculation of him being the son of the painter ‘Renoir’ amongst others.

The young Maurice had a worrying tendency for alcohol consumption and truancy from school. When signs of mental illness appeared, his mother suggested he take up painting. Showing real promise despite little instruction, Ultrillo began to attract local attention, eventually leading to critical and internal acclaim.

In 1928 he was awarded the esteemed ‘Cross of the Legion d’honneur’.

Have a look at our range of Maurice Utrillo hand signed limited edition prints. 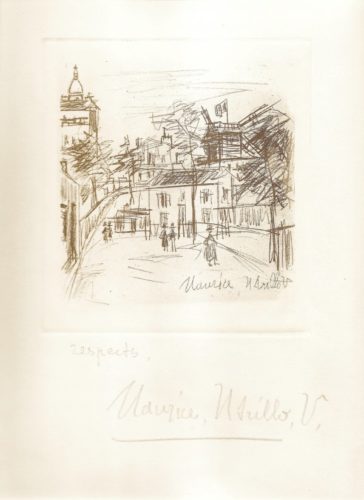 Galleries who deal in Maurice Utrillo prints and art