Maurico Lasansky is one of the few modern artists who have worked almost exclusively in the graphic media. Due to his early contributions in the development of graphic techniques and his dedication to printmaking, Lasansky is considered a forerunner in the evolution of the graphic arts as a critical art form and has become recognized as one the “Fathers of 20th Century American Printmaking.”

Born in Buenos Aires, Argentina on October 12, 1914, to an Eastern European immigrant who worked as an engraver of bank notes, Mauricio Lasansky began attending the Superior School of Fine Arts in 1933. His background was partially responsible for his interest in printmaking and he began his career by making woodcuts. He later turned to intaglio, concentrating on drypoint, and his first solo exhibition was presented in 1935 at Fort General Roca, Argentina.

In 1936, at the age of twenty-two, Lasansky had already become the director of the Free Fine Arts School in Villa Maria, Cordoba, Argentina. Francis Henry Taylor, director of the Metropolitan Museum of Art, met Lasansky in Argentina in 1941 and was so impressed with his work that, in 1943, he arranged for Lasansky to travel to New York on a Guggenheim Fellowship. Shortly after his arrival, he sent for his wife and children, as “he didn’t want to go back to Peron.” Lasansky studied the entire print collection of the Metropolitan Museum of Art and worked at Hayter’s experimental workshop, Atelier 17. This opportunity not only afforded him a wealth of knowledge about prints and printmakers but also exposed him to European artists displaced by the war.

The interest in printmaking as a fine art was revitalized in the United States in the mid 1930s with the formation of the Works Progress Administration’s graphic arts workshops. Many artists continued to explore the medium after the WPA projects were discontinued. The most important and experimental of these workshops was Stanley William Hayter’s Atelier 17 which opened in New York in 1940. His was the first independent American workshop developed exclusively for experimentation of the intaglio process and it radically altered the course of intaglio printmaking in the United States. At Atelier 17, artists formulated new methods of working and developed new printmaking techniques.

Invited by Professor Lester Longman to join the faculty of the University of Iowa, Lasansky relocated to Iowa City in 1946. He swiftly renovated the university’s printmaking department which had previously been directed by Emil Ganso. Within two years he was named associate professor of art and the Iowa Print Group was formed under his leadership. In January 1949, an exhibition of the members’ prints, entitled A New Direction in Intaglio, was installed at the Walker Art Center in Minneapolis. Lasansky made Iowa a germinal school and his students, including Ernest Freed, Malcolm Myers, John Paul Jones, Lee Chesney, Glen Alps, Ray French, and James Steg, carried on his principles as printmakers running graphic arts departments everywhere from U.C.L.A. to the universities of Texas, Minnesota, Kansas and Illinois, as well as Tulane, Michigan State and the Cleveland Institute of Art.

In 1975, the University of Iowa honored Lasansky with a retrospective that was accompanied by a catalogue raisonné by John Thein and Phillip Lasansky. They relied on Zigrosser’s earlier publication and Mauricio Lasansky’s memory and records, corrected by many published sources. Alan Fern, in his essay “The Prints of Mauricio Lasansky,”stated that “Lasansky himself has characterized the development in his work as an evolution from romantic, to classic, to ‘contemporary’ to—or back to—humanism; schematic as it is, his account of his stylistic growth is revealing for what it says about his attitude towards his work. The subject has remained the human being—his condition, his relationships, his society—but the great change has been in Lasansky’s command of the visual arts, and in his relationship to the work of other artists. In his full maturity, Lasansky expresses his art in terms of its themes; until then he had thought of it in relationahip to stylistic conceptions.”

Best known for large-scale prints in which he uses multiple plates and full range of colors, Lasansky combined a spectrum of graphic techniques including but not limited to etching, drypoint, aquatint and engraving. Throughout his stylistic evolution, he has created eloquent figural statements that are colorful, fresh and spontaneous. His early and last works show that his imagery has consistently dealt with elements that have undergone change and expansion as the work was created. The subject of his art is as important as the technical aspect of his printmaking.

Lasansky’s portraits appear as humanistic ideals when compared to the dehumanized figures that appear in his early prints. Many of his portraits begin in an individual format, but many times the idealized figure degenerates and is presented in graphic rather than pictorial space. He has a special regard for the spectator, as he portrays the image within the viewer‘s space.

Lasansky has devoted himself to exploring the expressive possibilities of the graphic arts. He has amassed a body of prints considered to be some of the most powerful and impressive in modern art. He has been the recipient of five Guggenheim Fellowships, six honorary Doctorate of Arts degrees and numerous other special honors. Lasansky’s work is internationally recognized having been exhibited worldwide and is held in the collections of virtually every major museum in the United States. 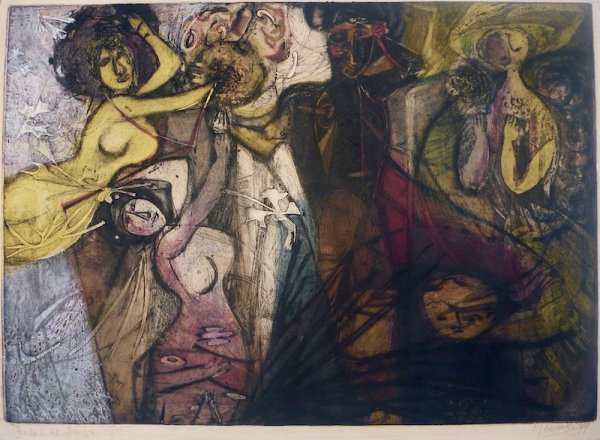 Galleries who deal in prints from Mauricio Lasansky