Born in Iran, raised in Hong Kong and educated in Europe, Mojoko (Steve Lawler) attended the prestigious FABRICA art residency in Treviso, Northern Italy in 2001. Launching his interactive design career at Diesel HQ, he quickly climbed through the creative industry as an artist, designer, art director and Creative Director. Steve is also the creator of the Kult Magazine, Gallery and Studio in Singapore.

His work has expanded into curation, installation, interactive design and fine art. Having worked with some of the most exciting artists, designers and animators around the world, he now operates within a network of over 600 artists under the label Kult.
His artistic work is an exploration of Trash Pop culture colliding with the old and historical, mixing media such as computer programming, digital sculpture, painting and printmaking. His works have regularly been showcased around the world at international institutions and independent galleries.

Reacting to the bombardment of images of today’s visual culture, he reworks and spits out mutations of the glossy pop, advertising world. The work is a reaction to living in modern Asia. TV, internet and outdoor advertising culture has influenced every aspect of his work, and his focus is dedicated to learning those tools of visual communication in order to subvert them. 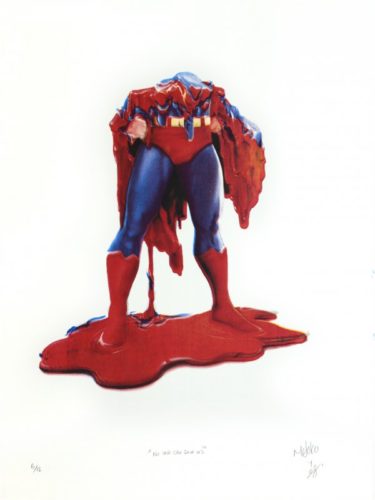 Galleries who deal in prints from Mojoko