In the first in a series of interviews with printmakers and artists, Katherine Oliver [KO] talks to Simon Lawson [SL] (artist printmaker) and Jack Kettlewell [JK] (artist) about collaboration, the element of chance, and the value of printmaking as an enriching experience which can add a new dimension to an artist’s practice.

(KO to SL): Tell us about how you collaborate with artists in the printmaking studio, particularly those who you haven’t worked with before.

SL: To start with, an artist has to be willing to allow him or herself to respond to the process; you can’t force it.  The printmaking process is like having a third person in the room. If you’re collaborating with someone for the first time it’s good for them to come with ideas, but as soon as you’ve made the first proof, they need to put their original idea away in a drawer – because you can’t force a preconceived idea on the process – you have to let the process offer up what it can do beyond that.

Somebody like John Carter (who Lawson recently worked with on an edition for the Royal Academy of Arts) – is really quite specific about what he wants so it becomes a technical challenge, to try and convert his work into etching. Whereas with someone like Tracey Emin, she’s a really strong character and an experienced printmaker, so it was more about getting her halfway into something that she wasn’t comfortable with. When we did a sugarlift etching together – which meant she had to paint directly onto the plate – she was anxious about whether it was going to work or not, and actually, I think it’s actually one of the nicest prints she’s done. I think jeopardy’s really good. You have to step outside your comfort zone and allow accidents to happen.

(KO to SL) How can printmaking complement and add a new dimension to an artist’s practice?

SL: As far as making work goes, if an artist comes to a point where they are struggling, – perhaps they want to do something new with their usual ideas and motifs or they’ve come to a bit of a creative cul de sac- they could try working with monoprints, which are direct and immediate. It gives an artist the opportunity to turn everything upside down. I mean, the minute you peel off a print it’s in reverse!  It’s a chance to play around with ideas without feeling that it’s going to have an impact on, for example, a much larger work.

It’s also really useful for an artist to step out of their studio environment and make mistakes. To make a change within a larger work can be a daunting prospect but in printmaking – there are no mistakes. An artist can experiment with new ideas and then take those away with them and hopefully begin a dialogue with their wider practice.

After the first session it’s a good idea to take the results away for a short time and digest. Printmaking can be quite exhausting. Both parties are opening up to each other with their work and the experience can be quite intense.

(KO to SL) How do you think original prints relate to unique works on paper?

SL: Original prints should be able to stand alone next to a unique work. They are still an original work on paper, but they’ve been produced via a matrix – for example a plate or a screen.  A print has been through a process but it doesn’t mean that it loses anything; actually it’s gained something. That type of mark, that’s produced in a particular kind of way – we could describe the resulting print as ‘an enhanced work’.

(KO to SL) Choose a print from the Printed Editions website that illustrates what you have been saying about jeopardy and chance. 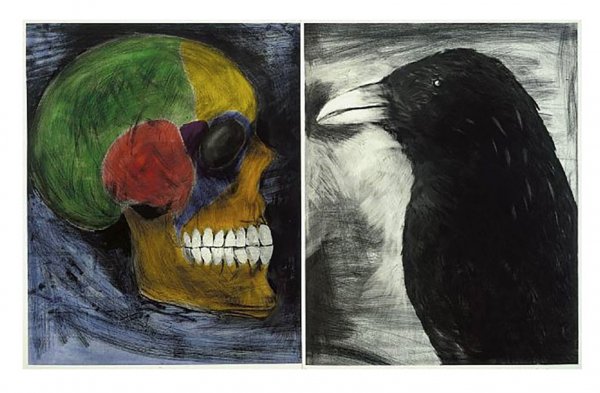 I love this print by Jim Dine. He goes in with an open mind as to what the result will be and runs with it – all of the things I like about printmaking. He’s also really technically astute even though it appears playful.

(KO to JK): Tell us about your first printmaking experience:

JK: My first experience of printmaking was 25 years ago at art school. I remembered loving what was there – the inks, the presses, the smell – but my technical knowledge was lacking and I didn’t have a close relationship with the tutors so the results weren’t what I was hoping for. I was apprehensive about working with others as I’m used to being on my own in the studio.

When I started making these new etchings I thought – wow – I’m getting a one-to-one experience here. Simon was so generous with his time and not wanting to steer and I realized that I could tap into this amazing amount of knowledge. One of the best things he said was ‘if it’s not going to be good fun, there’s no point doing it’. I didn’t know exactly what I wanted – but I knew I wanted a freshness of sorts: ‘bang–out it comes!’ – and he got that.

(KO to JK): Has the experience of making prints now impacted upon your wider practice and the way you think about making work?

JK: Part of my work at the moment involves an element of chance – it’s a big part of my making process, being able to run with that. You want to be progressive as an artist otherwise you can get stuck in a rut – even making miniscule advances is good. It’s about doing things that I’m not so comfortable with.

In terms of being invited to make these prints, the timing was just amazing. I’d been working with oil on paper – the cocktail glasses and the palms – you get one go at those and you can’t make any adjustments because once the paint is on the paper it’s dry. The printmaking process felt similar and I got used to thinking about the endpoint of a piece and working backwards. Making prints has made me think about a different way of arriving at the finishing line.

(KO to JK) Choose a print from the Printed Edition site that you relates to what you’ve been saying and tell us why. 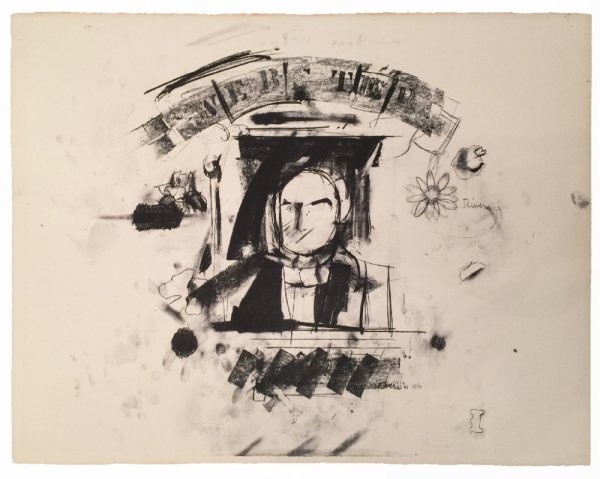 I didn’t know that Larry Rivers had done any printing. I chose this print because you get an idea of a bit of graphic and a bit of text but it’s all smudged around. I just love that depth of the black – it’s wonderful. It made me realise that artists latch on to a motif and they go all over the place with it and it opens up new avenues of pushing their practice. Things come full circle – different parts of the practice all inform one other, in the end.

Simon Lawson is a printmaking tutor specialising in etching in the Royal Academy (RA) Schools and founder of Huguenot Editions. He has worked with numerous internationally renowned and emerging artists.

Jack Kettlewell is a London-based artist who makes both figurative and abstract work that investigates intrigue and beauty within the seemingly ordinary. Kettlewell has just produced his first etchings for Oliver Projects.

Katherine Oliver is a former curator at the Royal Academy of Arts who has recently founded Oliver Projects, a new initiative that promotes works on paper and prints with a special focus upon artists based in South London.