Native New Yorker Neil Leifer began photographing sports events as a teenager. Over 160 of his pictures have appeared on the cover of Sports Illustrated and over 40 of his photographs have graced the cover of Time. 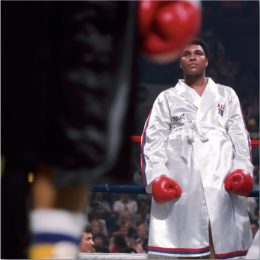 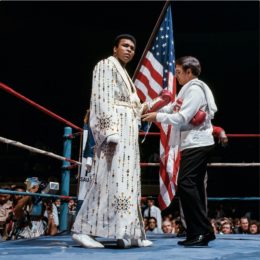 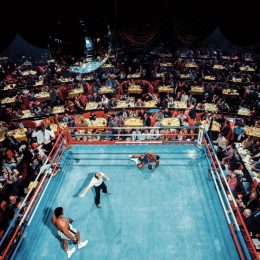 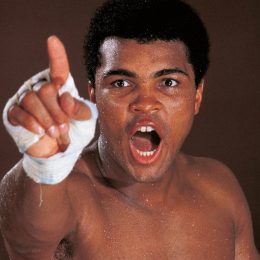 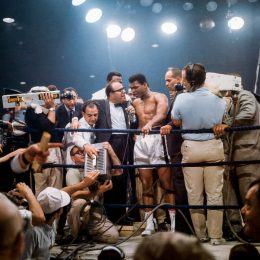 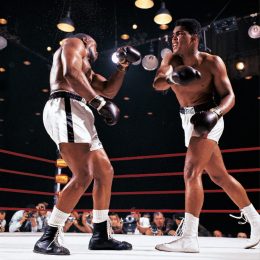 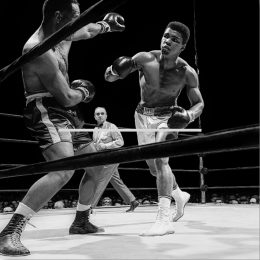 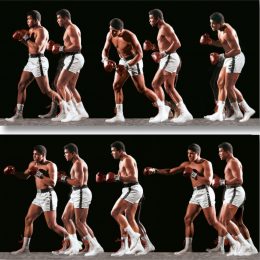 Ali vs. Young, Capital Centre, Landover, Maryland, April 30, 1976: Ali sizes up his opponent, Philadelphia native Jimmy Young, with cool disdain. Second only to his prowess in the ring, Ali’s pre-match psychological warfare was the stuff of legend. A well-timed whisper mid-fight, round predictions to the press, and boasts and taunts with his famously sharp wit all carefully played to his opponents’ greatest insecurities.

Fit for a King, Ali vs. Bugner, Las Vegas Convention Center, February 14, 1973: For the Valentine’s Day bout against one-time sparring partner Joe Bugner, Ali abandoned his usual white terrycloth robe in favor of this uncharacteristically elaborate design. Elvis Presley, in town for a series of performances at the Vegas Hilton, gave Ali the $ 3,000 robe earlier that week with the hope that he’d wear it to the fight.

Ali vs. Foster, Sahara Tahoe, Stateline, Nevada, November 11, 1972: The Ali-Foster fight was staged in the showroom at the Sahara Tahoe in Lake Tahoe, with the booths used for the dinner show earning ringside status. Muhammad Ali brought down light-heavyweight Bob Foster seven times before a Round 8 knockout. “Neil Leifer’s work is the quintessence of great sports photography,” said Jerry Seinfeld. “It makes you hold your breath for a split second, just as you do when you’re experiencing a great sports moment in real life.”

The Mouth That Roared, Miami Beach, October 9, 1970: “It was impossible to take a bad photograph of Ali,” said Neil Leifer. ”I would often see him doing this signature point in the ring, inspired by the Uncle Sam recruiting poster, almost saying, ‘I want you!’ to his opponents.” Fresh on the wave of his comeback, Ali got himself in great shape to fight Jerry Quarry on October 26 at the Municipal Auditorium in Atlanta, winning in three rounds.

Ali Victorious, Ali vs. Liston II, St. Dominic’s Arena, Lewiston, Maine, May 25, 1965: A TV crew, armed with prehistoric-looking hand-held cameras, clambers to capture a triumphant Ali after his surreal two-minute rematch against Sonny Liston. Only 2,434 people paid to see the rematch, the smallest ever audience for a heavyweight title fight.

Clay vs. Liston I, Convention Center, Miami Beach, February 25, 1964: Heavyweight Champion Sonny Liston was used to bullying opponents in the ring, but 22-year-old Ali, then known as Cassius Clay, was too quick for him. Ali dodged Liston, cut him, and got through two rounds when something on Liston’s gloves blinded him. Ali ultimately prevailed. “It’s hard to be humble when you’re as great as I am,” he later declared. This photograph appeared on the March 9, 1964 cover of Sports Illustrated.

Ali vs. Folley, Madison Square Garden, New York, March 22, 1967: The 25-year-old champion had more on his mind that night than Zora Folley. Convicted of draft evasion three months after the fight, he lost 43 months of his athletic prime while mired in legal battles before he could box again. Nevertheless, Folley was knocked out in the seventh round. Despite the seemingly insurmountable odds, Ali returned to conquer the boxing world in spectacular fashion three years later.

Ali Invents the Double-Clutch Shuffle, LIFE magazine studio, December 1966: Muhammad Ali, poised for battle on the eve of his title defense against Ernie Terrell, demonstrates the double-clutch shuffle in a multiple exposure sequence engineered by Neil Leifer. When the champ first announced this new move in his fighting arsenal on the Tonight Show some months earlier, he whispered to Johnny Carson, ‘I’ve got a secret weapon. I’m going to call it the double-clutch shuffle.’ “It was as though he wasn’t on camera with an audience watching,” says Leifer. The dance became so essential to his repertoire it would go on to be called the Ali Shuffle.