Gerald Scarfe was born in London. After a brief period at the Royal College of Art in London, he established himself as a satirical cartoonist, working for Punch magazine and Private Eye during the early sixties, and in 1967 he began a long association with the Sunday Times as their political cartoonist, also carrying out reportage assignments in Vietnam, the Middle East, India and Northern Ireland.

Gerald has had many exhibitions of his work worldwide, including New York, Osaka, Montreal, Los Angeles, Sydney, Melbourne, Chicago, Germany and London, and more than 50 one-man shows. He has designed the sets and costumes for many plays, operas and musicals in London, Houston, Los Angeles, San Francisco, Seattle, and New Zealand.

Gerald Scarfe has collaborated with Los Angeles Opera several times, including the designs for Fantastic Mr Fox, and The Magic Flute. He designed the sets and costumes for Orpheus in the Underworld, for the English National Opera at the London Coliseum, later remounted in Detroit, Houston and Los Angeles, and also designed the English National Ballet production of The Nutcracker, which was in their Christmas repertoire for 5 years.

Gerald’s film work includes Walt Disney’s Hercules, and he designed and directed the animation sequences for the film of Pink Floyd’s The Wall, as well as the live concerts. He recently collaborated with Roger Waters once again, for the new live tour of The Wall. On television Gerald created the opening title sequences for the classic comedy series, Yes Minister and Yes Prime Minister.

He has written, directed and appeared in many live action and documentary films for the BBC and Channel 4 and has published a number of books of his work.

Gerald Scarfe has now been political cartoonist for the London Sunday Times for 44 years, and has also worked for The New Yorker magazine for 21 years. His work regularly appears in many periodicals in the UK and worldwide. 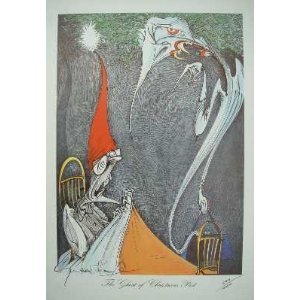 Galleries who deal in prints from Gerald Scarfe