Artist and photographer Roger Ballen was born in New York in 1950, and he has lived in Johannesburg, South Africa, since the 1970s. Roger Ballen’s interest in photography dates to when his mother worked as a photo editor with Magnum Photos in New York, and as a teenager Ballen befriended the likes of Henri Cartier-Bresson, Bruce Davidson, and Elliott Erwitt. Working as a geologist, Roger Ballen began to photograph the homes and white residents of rural South Africa before developing his more theatrical and expressive documentary style in the late-1990s. Well known works by Roger Ballen include Twins, Front Door, Hope Town, Bedroom of Railway Worker, Puppy Between Feet, Boarding House and Prowling.

Roger Ballen’s photographs are like images from a waking dream: compelling and thought-provoking, with layers of rich details, flashes of dark humour, and an altered sense of place. Blurring the boundaries between documentary photography and art, Roger Ballen’s work is both a social statement and a complex psychological study.

Ballen’s recent work enters into a new realm of photography as the series of works from Boarding House are almost exclusively painterly and sculptural in ways not immediately associated with photographs. The human and animal subjects have all but disappeared and function more like stage props or weird sculptures within the composition.

Roger Ballen has won numerous awards including Art Directors Club Award Photography, Photographer of the Year at Rencontres d’ Arles, PhotoEspana for Best Photographic Book of the Year in Spain and was a finalist for the Citigroup Prize. 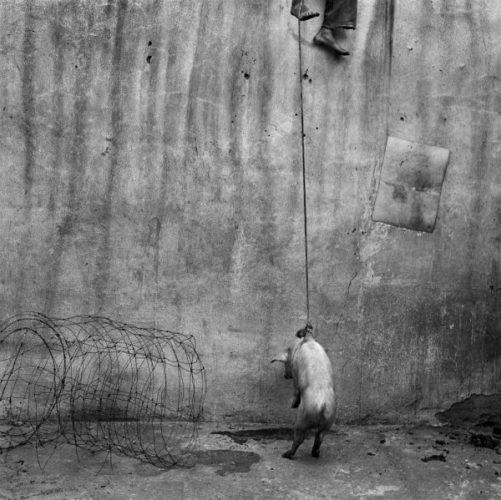 Galleries who deal in prints from Roger Ballen